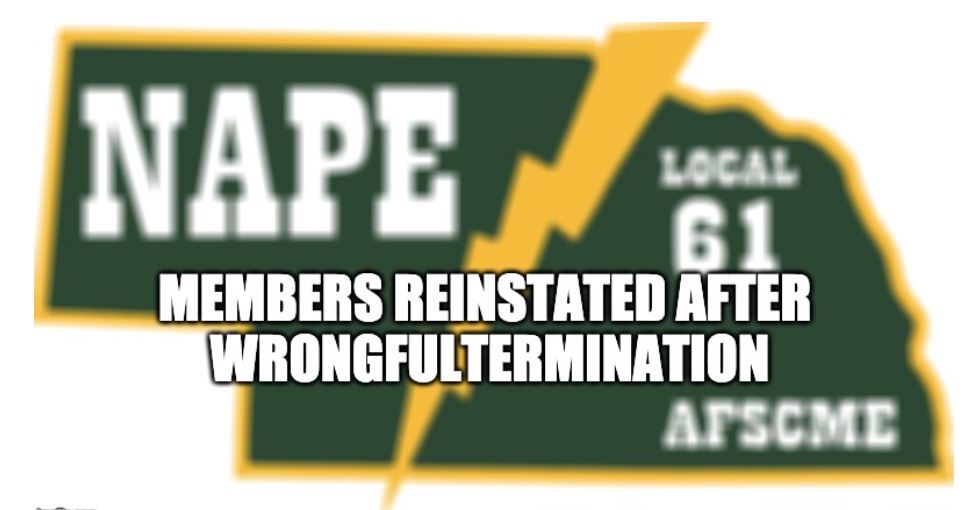 NAPE filed 78 grievances on behalf of members in 2019. NAPE prevailed in 75% of the cases, and over $100,000 in back wages and benefits were awarded to NAPE members who were wrongfully terminated and were reinstated to their jobs by arbitrators and hearing officers. Three more victories took place in January.

Not many people know that supervisors are eligible to be NAPE members. Although they do not have collective bargaining rights and do not work under the NAPE contract, supervisors with a classification that starts with “V” are eligible for membership. One benefit of membership for supervisors is representation by NAPE staff and attorneys through the Classified Rules and Regulations grievance process.

One of our supervisor members was terminated by the Department of Administrative Services (DAS) after it was alleged that he threatened co-workers in the lobby of the Nebraska State Office Building. The overwhelming evidence showed that the allegation was not true and did not support termination. NAPE staff represented our member before the State Personnel Board. He was reinstated and received back pay and benefits for the seven months while the case was pending.

Another employee was terminated by DHHS after it was alleged that she shared confidential information from the NFOCUS System with a colleague. NAPE successfully argued before the State Personnel Board that employees who share information with other employees are not necessarily violating confidentiality if both employees have access to the information. The employee was reinstated and awarded back pay and benefits for the eight months while the case was pending.

Another NAPE member was terminated by DHHS for allegedly abusing and neglecting an individual at the Beatrice State Developmental Center. The State Patrol and Adult Protective Services both declined to investigate after determining there was no case for abuse and neglect. BSDC did an internal investigation that was initially unfounded, but then conducted an additional investigation and our member was fired. A hearing officer reinstated our member with full back pay and benefits, however, DHHS appealed. A settlement agreement was reached on behalf of our member shortly before an arbitration hearing was scheduled.

If you receive a notice of allegations or other disciplinary document, do not hesitate to discuss the matter with a NAPE steward or staff member. The actions you take at the very beginning of your case can have long reaching impacts. We are here to help!