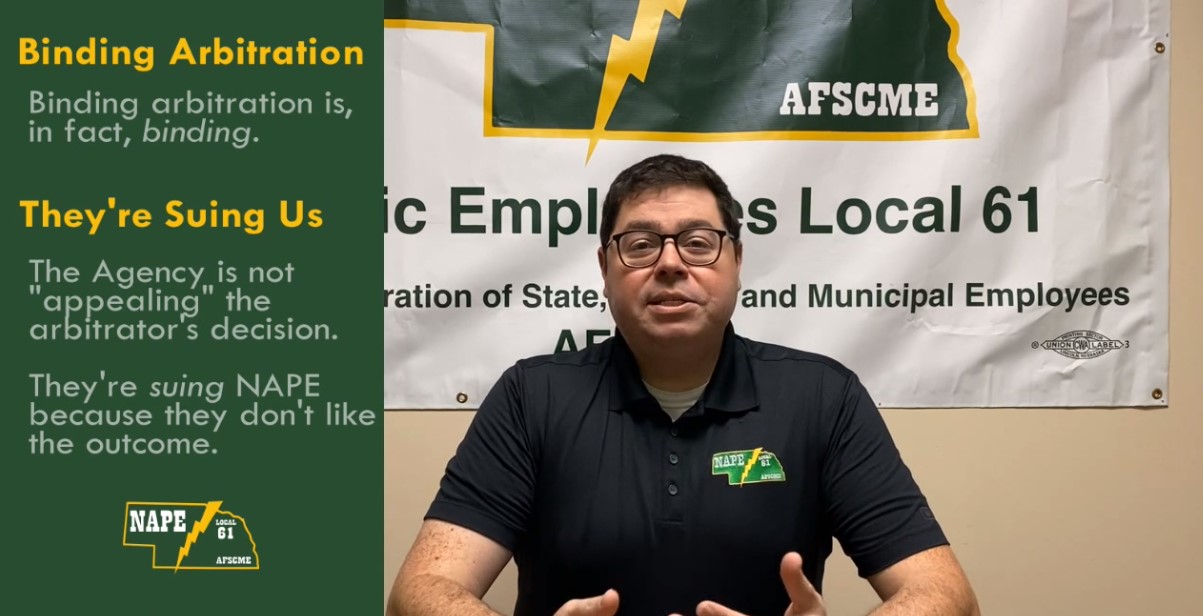 Late in the day on November 13, DHHS CEO Dannette Smith sent a message to employees that the arbitration decision that invalidated the dress code she unilaterally imposed, in violation of the NAPE contract, was not binding and was being appealed. Ms. Smith stated that she would allow employees to wear casual clothing until January 1, but that employees would have to return to the dress code the arbitrator determined was improper on January 2 while DHHS “appealed” the decision.

Ms. Smith’s message is factually incorrect. The arbitrator’s decision is final, binding, and not appealable. Article 4.7.9 of our contract states, “The decision of the arbitrator shall be final and may not be appealed.” On November 13, NAPE was served with a lawsuit filed by DHHS in the District Court of Lancaster County. The suit alleges that the arbitrator exceeded his authority, and asks the District Court to vacate the decision in accordance with the Uniform Arbitration Act.

The argument that the arbitrator exceeded his authority is flimsy at best, and NAPE looks forward to arguing the case on behalf of our members in court. We will file our response in the coming weeks, and will vigorously defend the rights of all state employees. While we are confident in our argument, if the court rules against us, it is likely that it will simply order a “rehearing” of the case before the same arbitrator. We do not expect the results to change.

What does this mean for our members?

Our members are asking for advice on what to wear after January 1. While we know that the arbitrator’s decision is binding, employees are placed in a difficult position having to choose between wearing casual clothes or facing potential disciplinary action for insubordination.

Our advice is that it is always best to obey your supervisor, and allow the legal process to play out. If an employee were to be disciplined based on the dress code invalidated by the arbitrator, we would defend our members, however, we never advise our members to do something that might lead to discipline – even if we would prevail in the discipline process.

Now, more than ever, we must unite together. At a time when Ms. Smith should be focused on battling an out of control pandemic, she has chosen to battle her lowest paid employees over a policy that was found to be “arbitrary and capricious” by the duly appointed arbitrator. One of the reasons we have a strong union is to amplify our voices and ensure our rights in the workplace aren’t trampled by an out of touch leader. We will continue to fight this case in court – we are NAPE Strong!

Not A NAPE Member? Click Here to Join Today!