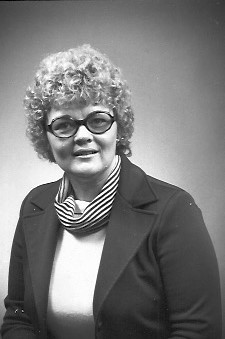 May 4, 2022 marks the 50th Anniversary of the incorporation of the Nebraska Association of Public Employes! Throughout 2022, be sure to like and follow us on Facebook to see posts celebrating our history and growth over the years.

In the Spring of 1971, the Nebraska Department of Roads Employee Association (NDREA) had its first meeting in Lincoln. The decision was made to be an independent association rather than a union. Richard Kiernan, Chairman of the NDREA, was fired from the Department of Roads in 1971 by the NDOR Director-State Engineer. It took a three year battle through the Commission on Industrial Relations and court system to win Kiernan’s reinstatement. In December 1971 an office was set up in the Executive Building and Linville Prall was hired as the first Executive Director.

The membership elected Marilyn Stines (pictured) as the first Chairperson of our union, and in the first five years, grew to 1,300 members in twenty-one different chapters. The goal was to work to gain collective bargaining rights and a strong voice for Nebraska public employees. From humble beginnings in 1972, NAPE/AFSCME has become the second largest public sector labor union in Nebraska, and a powerful and leading force in the labor movement in Nebraska.

Thank you to Lyle C. Nelson and Shirley Daugherty who compiled this information for the 20th Anniversary of NAPE in 1992. (See pictured, Marilyn Stines, NAPE’s first Chairperson)